Sharing an old article by Dr. Sammer Mani Dixit who was a visiting faculty at the Faculty of Life Sciences and Biotechnology where he recounts his experiences at SAU. 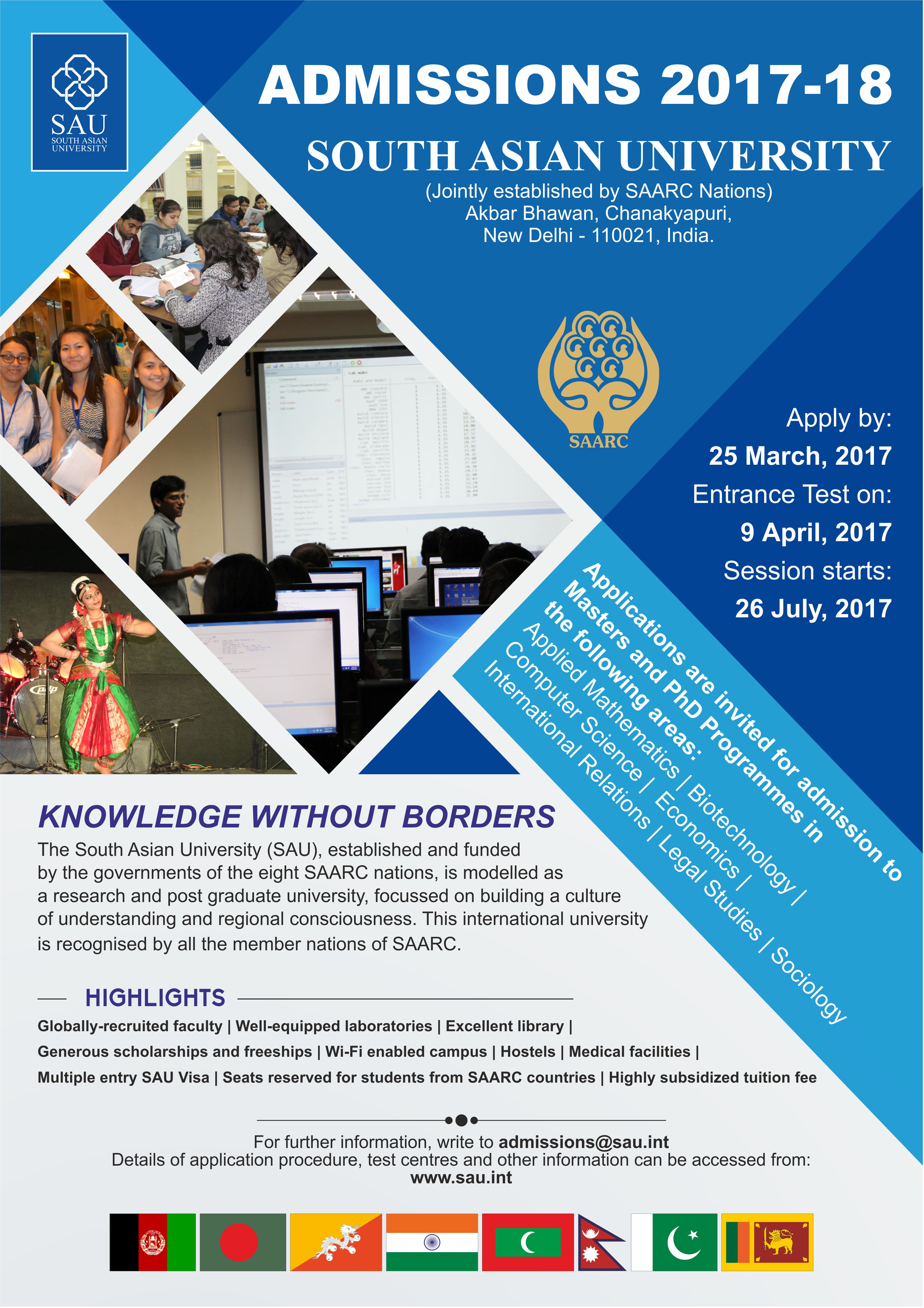 The final results of the SAU Entrance Test 2015 for session 2015-16 have been put up on the SAU website. Aspirants can check their results by clicking on the link here.

Congratulations to all those who have made the cut. See you soon at the campus.

Catch the glimpses of what makes the South Asian University so unique. 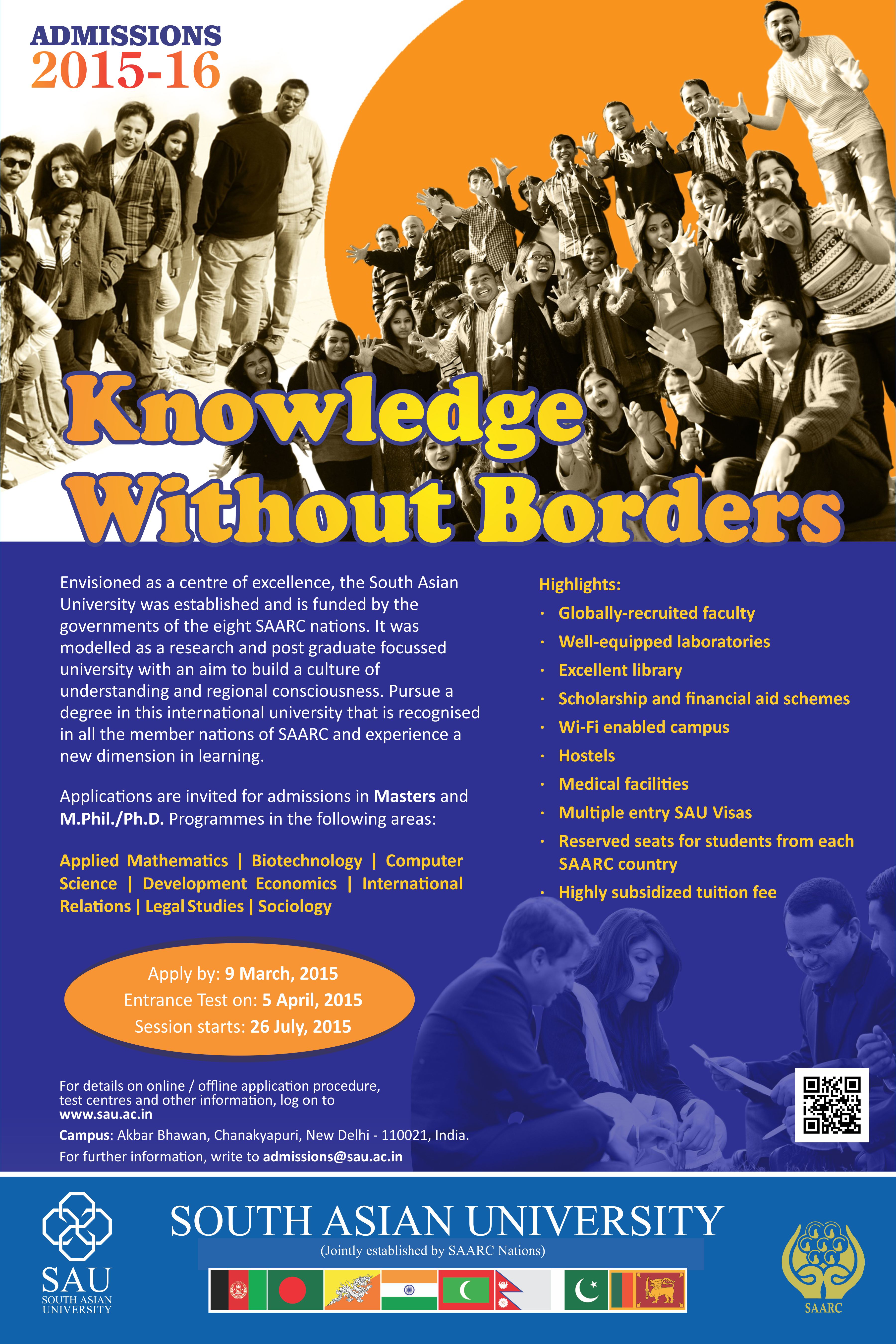 SAU announces admission to various Master’s and MPhil/PhD programmes for the session 2015-16. The selections for the seats will be based on an entrance test. There are two ways to submit your application – Online and Offline. In both modes, you need to log on to the university website www.sau.ac.in

If you wish to submit your application offline, all you need to do is download the application form from the website and fill it up, and submit it to the university with a demand draft of INR 600 or USD 10.

For online submission, you just need to log on to the university website and fill up the online admission form and pay your entrance test fee using any of the these means – Internet banking, Debit Card and Credit Card. Accepted cards are Master, Visa and Maestro. It is a hassle free and a more convenient way to apply.

While the last date of form submission is 9 March 2015, we encourage you to do it as soon as possible to avoid any last minute rush. The entrance test happens on 5 April 2015 and session starts 26 June 2015.

South Asian University is a good place to learn

It took a simple google of the phrase- ‘Is South Asian University good’ for me to realize that a lot of people must be
looking for an answer to this question, those who have applied and got through, those who will be applying later and so on. After spending a good one-year at South Asian University as a student of Masters in International Relations, I can with all my conviction reply to this search term in an affirmative. Yes South Asian University is good! Initially I was apprehensive about joining a new university for a course in which I was going to be the first batch especially when I got through in other universities too but now I am sure and happy about the choice I made then. There are three reasons, which will make it easier for you to choose it over anything else:

#1 To begin with the University is a truly multicultural university. South Asia as a region is an organic entity but still cultures are many and most of them share multiple threads of commonness. Such an environment in the classroom is very healthy for rich discussions. Not only your classmates will bring examples from their particular context but also good practices in one part of the region may be tried in rest.Our student life is the right time when if exposed to a multicultural setup, we grow up to become confident individuals. This may be the time when your personality will pick up traits like sensitivity, sensibility, tolerance, cooperation etc and later when you will go for work, you will be better sought then an average individual.

#2 One of the apprehensions that you may have is the newness of the university. In case of universities, we often go for reputed established names. We may get a brand to add to our resume but what remains is our own development. South Asian University is a brand in the making. It has a great potential to be ‘The University’ amongst the SAARC countries. You will not regret your association with it as you will get to do things your way. Its up for grabs to do things you want it to do. You can make societies, clubs, and traditions etc and one day, your juniors will remember you fondly. This is something, which can happen and flourish in a new setup only. And as an insider tip, our teachers have been kind enough to teach us the way we understood the best. They have adjusted themselves to our pace without diluting the quality of the academic experience. This is something, which only South Asian University can assure you. Plus where else can you be a South Asian? Everywhere else we remain- Indian, Pakistani and so on but is not South Asian as an identity a lot much better?

#3 South Asian University has courses, which are not found anywhere, and courses, which are scarce. It has a unique course in Economics- MA Development Economics, which is not your usual masters course in economics. It has a special focus on the ‘development’ angle of economics, which makes it one of its kind and quite helpful for a region, which is developing/underdeveloped. You will be better absorbed by the system in your country for the ideas you will get here on development.Likewise International Relations, being the west-originated west-dominated discipline it is, has very few universities offering it. In India, South Asian University is the only non-private University, which is offering the course. JNU, Sikkim and Pondicherry have MA Politics IR, which is mostly about politics with a specialization in IR.Jadavpur University too has it but only for Pol Sci (H) graduates. Also, as a quick tip, IR is the best to be studied in a multicultural setup like SAU.
PS: South Asian University is an autonomous University set up by the SAARC nations- India, Pakistan, Sri Lanka, Nepal, Bangladesh, Afghanistan, Maldives and Bhutan. It is often confused with JNU or as a part of it because few courses and admin office of the university were once operating from JNU, Old Campus.